The East Window was the largest window Simon Whistler (1940 – 2005) engraved.
The glass was divided into seven separate panels because of the size.

The East Window (also known as the Chancel Millennium Window) was the largest window Simon Whistler (1940 – 2005) engraved. The glass was divided into seven separate panels because of the size. The overall theme is Christ the Good Shepherd which partly relates to David Saunders, the Pious Shepherd of Salisbury Plain who lived in the parish from 1717 to 1796, whose gravestone is near the north-east corner of the church.

The window is in memory of Bruno and Peggy Coston. The figure of Christ is five feet tall, with the letter M shown as nails from the Cross and sheaves of corn on either side symbolising man and nature. These two Ms depict the year 2000. The landscape across the lower parts of the window shows on the left: an avenue of stones, as at Avebury, indicating the antiquity of the area. In the centre: still waters, as in the 23rd Psalm. On the right: All Saints’ Church with, in the distance across the Plain, the spire of Salisbury Cathedral.

The window was dedicated by the The Rt. Rvd. Peter Hullah, Bishop of Ramsbury. 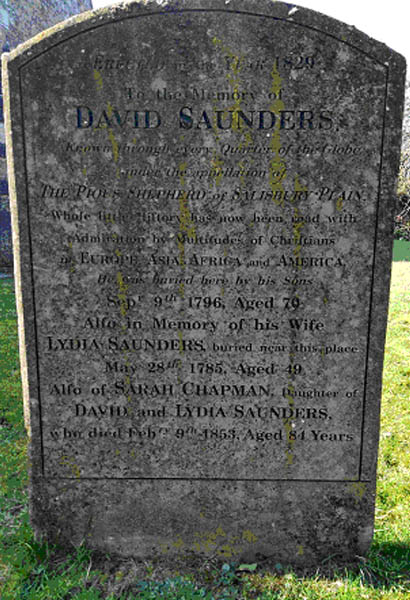 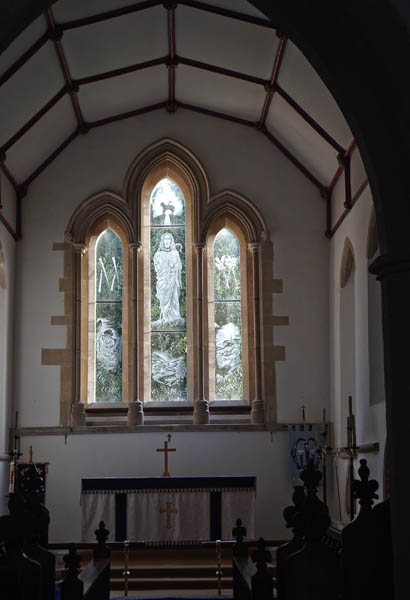 Simon’s funeral was held in All Saints’ Church on 26th April, 2005. He was the son of Laurence Whistler and the nephew of Rex Whistler. Other local examples of his work are in Etchilhampton and Milton Lilbourne churches.

Maev Kennedy, has given us permission to use this wonderful piece that she wrote for The Guardian Newspaper after she met with Simon Whistler in 2005. It was his last interview before his death, and she never expected to be using the material for his obituary.

In the best pieces engraved by the musician and artist Simon Whistler, who has died aged 64, the glass and the marks scratched into it seem to dissolve, leaving only the images suspended in light. He described the techniques he inherited from his father, the engraver Sir Laurence Whistler, as releasing the light trapped between the surfaces of a piece of glass. Laurence (obituary, January 6 2001) had virtually re-invented the lost techniques of the great 17th-century glass artists, particularly stippling, a staggeringly labour-intensive technique of cutting myriad tiny marks into the glass, which can give the subtlety of pencil drawing to the brittle medium. Simon wondered if he had measured up to the genius of his father – who was in turn haunted by the brilliance of his own brother, the painter Rex Whistler, who lived fast and died young, killed in action in 1944.

The style of the father and son was very similar, and they occasionally worked together on commissions, to be seen in churches, municipal buildings, college collections, museums and private collections all over the country: lettering crisp as frost, landscapes, buildings, the spirals of music in which the musician son excelled, floating in glass. Simon died with one last design in his mind’s eye, a window for the tiny church near his Wiltshire home, where he and his violinist wife Maggie ran a music festival. It was never executed.

In the last decade, he completed a string of major commissions, including an imposing set of church windows for All Saints at West Lavington, Wiltshire, to celebrate the millennium – he was startled when viewers pointed out that the strong bony right hand of the Christ was unmistakably his own – and a beautiful Thomas Hardy memorial window at St Juliot’s in Boscastle, Cornwall. 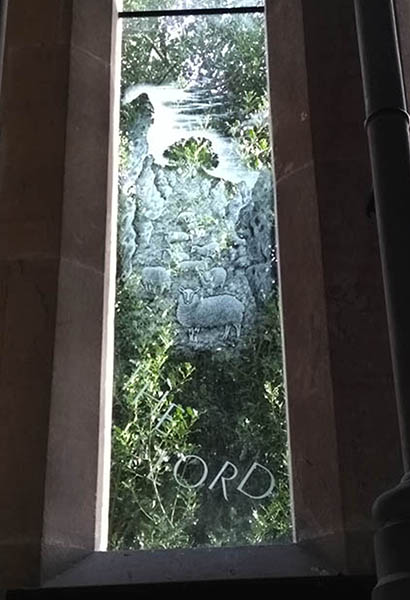 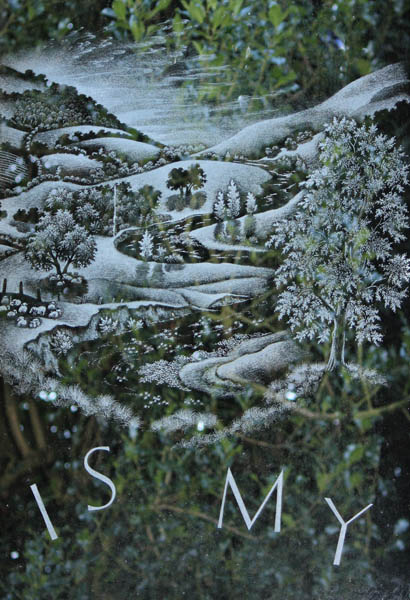 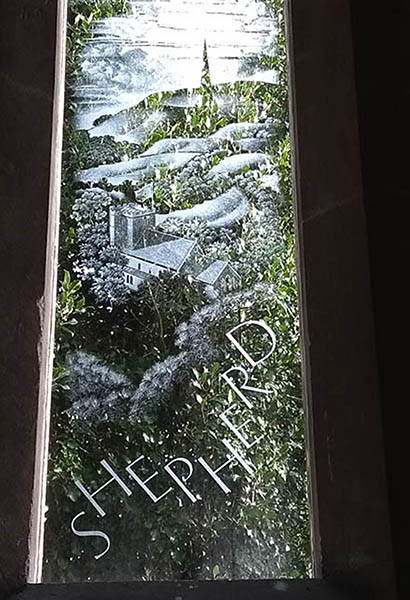 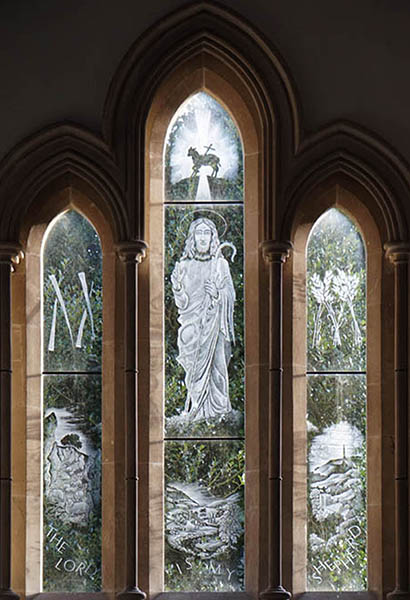 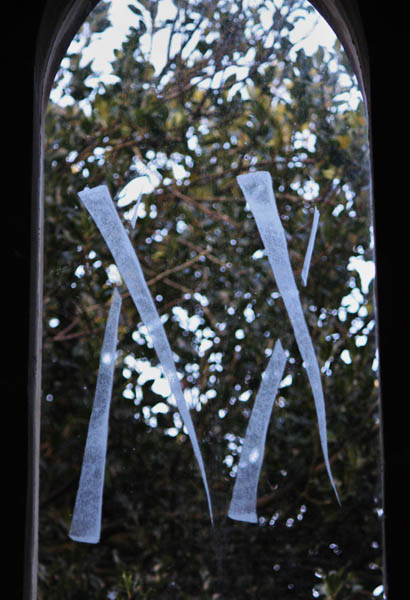 Despite the torrent of work, the early symptoms of motor neurone disease were apparent. Simon knew in his last years that he was working against the clock: in his final months his right hand was still rock steady, but had no longer the strength even to hold a pencil. His last commission, two years ago, was a goblet made as a retirement gift for the head of his old school, Stowe.

Then he wrote a strange and fascinating book, On A Glass Lightly (2004), part memoir, part catalogue of a lifetime in glass. He described it as a rite of passage, a one-sided continuation of a lifelong conversation with his father. “It seems strange that it has been done in his absence, so he couldn’t answer back,” he told me in December 2004. “I had him looking over my shoulder all my life as an engraver – and for me, in writing, the book also had him as a shadow.”

Although they were so close, frequently working side by side, exhibiting together, and consulting one another on work all their lives, his relationship with his father was never easy. His mother, the beautiful actor Jill Furse, granddaughter of the poet Sir Henry Newbolt, died after giving birth to a daughter, when Simon was only four. Although cherished by his grandparents, he felt his father was unable to demonstrate the affection the small boy craved. One of his most beautiful pieces was an engraving of his grandparents’ Devon home, an evocation of childhood happiness.

Their working relationship was equally uneasy. He was 10 when he engraved a violin on a tooth mug. His father spotted and fostered the talent but, Simon felt, also tested and judged him harshly. As a student, home from Stowe or the Royal Academy of Music in the late 1950s, he was often set tasks which would have absorbed the entire holiday. In the long hot summer of 1961, when Simon just wanted to play croquet, he failed to finish executing Laurence’s designs on four decanters, resulting in the late delivery of a commission: the father was enraged, the son anguished. He still felt the guilt more than 40 years later, and included illustrations of the two surviving decanters in his book. His music took him around the world, playing the viola with ensembles including the English Chamber Orchestra, the Orchestra of St John’s Smith Square and the Orchestra of the Age of Englightenment. His great love was chamber music: he performed with the Georgian quartet, Hausmusik, and appeared as a guest with the Salomon quartet. His music career lasted for 30 years, until he felt he had to choose – and chose glass.

In 1971 he married Jennifer Helsham, an Australian musician. They divorced in 1994. In 1997 he married Maggie Faultless, of the Orchestra of the Age of Enlightenment, who survives him. Simon died fearing that the art he and his father recreated and perfected might die with them. There is no full-time course in glass engraving in the country, a fact he described, sadly, as “reprehensible”.