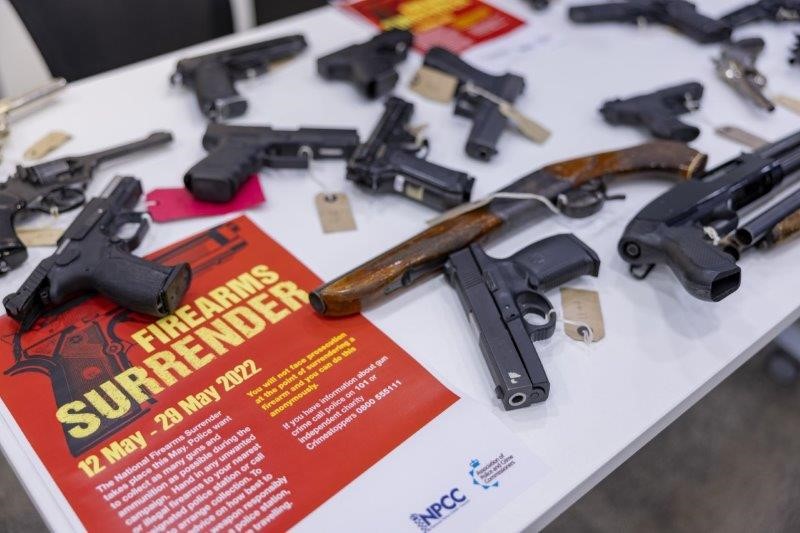 From yesterday (12 May), Wiltshire Police is joining other Forces in Op Aztec, the national firearms surrender, appealing for people to hand in unwanted guns with a two week surrender of firearms and ammunition.

The surrender will run until 29 May 2022. Surrendering unwanted, unlicensed and illegal weapons avoids the risk of them becoming involved in criminality and means that members of the community can dispose of firearms in a safe place.

Many firearms are sometimes held in innocence and ignorance of their illegality or are overlooked and forgotten in people’s homes. Some are held legally and are no longer required. Others are acquired and distributed by criminal networks to harm, threaten and intimidate their local communities. The surrender gives people the chance to dispose of firearms or ammunition by simply taking them to a local police station and handing them over.
During that period, those surrendering firearms will not face prosecution for the illegal possession at the point of surrender and can remain anonymous.

Sergeant Bill Monk from Specialist Operations said: “The fight against gun crime is stronger than ever and we use a variety of tactics to locate weapons that have fallen into the wrong hands – but we need the public’s help. We want as many firearms as possible and would encourage people to hand them in at either Chippenham, Melksham, Trowbridge, Salisbury or Swindon Police Stations during the opening hours shown on the Force website.”

Nationally firearms crime remains low however there are still very serious incidents involving guns taking place and we are working with partners and our local communities to safeguard, educate and intervene at the earliest opportunity.

This two-week surrender is a campaign to prevent firearms from falling into the pool of criminally used weapons.”

Changes to legislation mean it is no longer legal, in some cases, to own specific firearms without a license, if at all.  It is the responsibility of the owner to ensure that they meet the relevant ownership requirements. This applies to some antiques and weapons of specific calibres.

During the surrender members of the public are encouraged to take firearms into nominated police stations and hand them over the front counter:

If you know of people involved in illegal firearms contact Wiltshire Police through the reporting section of the website or call 101.
You can also report anonymously to Crimestoppers on 0800 555 111.