“At this spot Mr. DEAN, of Imber was attacked and robbed
by four highwaymen, in the evening of October 21st 1839.”

The Robbers’ Stone II Memorial stone. c.1840 is made of Limestone and found on the verge of the A360 just south of West Lavington. It is approximately 1.6m high with cast iron plate attached to front, bearing inscription of a robbery on October 21st, 1839 and the pursuit, apprehension and punishment of four felons. It commemorates a victory for law and order over highwaymen who roamed the lonely downs in the Lavington area.

AT THIS SPOT Mr. DEAN, of Imber was Attacked and Robbed by Four Highwaymen, in the evening of Octr. 21st. 1839. After a spirited pursuit of three hours one of the Felons BENJAMIN COLCLOUGH fell dead on Chitterne Down. THOMAS SAUNDERS, GEORGE WATERS, & RICHARD HARRIS, were eventually Captured, and were convicted at the ensuing Quarter Sessions at Devizes, and Transported for the term of Fifteen Years. This Monument is erected by Public Subscription as a warning to those who presumptuously think to escape the punishment God has threatened against Theives and Robbers. 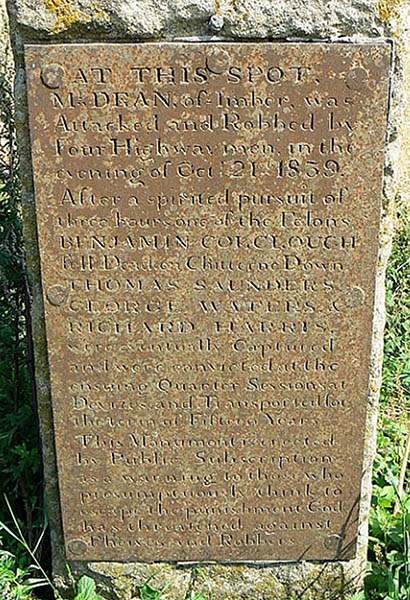 Note the spelling of “thieves” as “theives” on the monument! 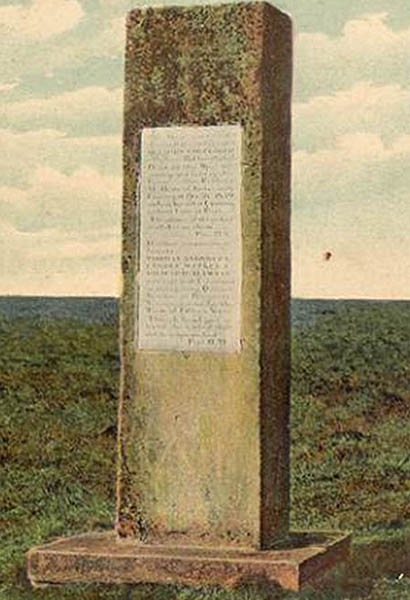 The second monument within MOD land at Chitterne which records the death of one of the fleeing robbers. 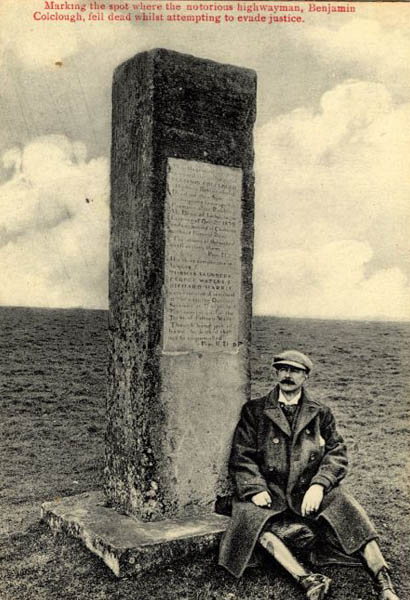 Robbers’ Stone at Chitterne as it once looked. Postcard from Rev. Canner’s History of Chitterne by kind permission of Sue Robbinson.

There is a further monument within MOD land at Chitterne which records the death of one of the fleeing robbers. Unfortunately, it is not accessible to the public. The inscription reads:

This monument is erected to record the awful end of Benjamin Colclough, a highway robber, who fell dead on this spot in attempting to escape his pursuers after robbing Mr Dean of Imber in the eventing of October 21st 1839, and was buried at Chitterne without funeral rights. ‘The robbery of the wicked shall destroy them’ Proverbs 21.7 The three companions in iniquity, Thomas Saunders, George Waters and Richard Harris were captured and sentenced at the ensuing Quarter Session of Devizes to transportation for the term of fifteen years. Though hand join in hand the wicked shall not be unpunished’ proverbs 11.21.

Matthew Dean was making his way home to Seagrams Farm at Imber from Devizes market on 21st October 1839, when he was attacked by four men (Benjamin Colclough, Thomas Saunders, George Waters and Richard Harris) near Gore Cross Farm.

They pulled him to the ground from his horse and robbed him of three £20 notes from the North Wilts Bank, a sovereign and a half in gold, £2 in silver and his hat. The robbers ran off towards West Lavington.
When Mr Dean recovered, he followed the men on foot, enlisting the help of Mr James Morgan, John Baish and James Kite of Gore Cross Farm “take a stick in your hand as a man has been robbed” yelled Baish. The chase was on with one robber losing his pursuers and eventually the three other robbers were tracked down. Morgan left Baish and Kite to get further assistance from William Hooper who brought his gun.

The robbers were then surrounded and challenged, but denied all knowledge saying “we’ll fight for it first”. William Hooper told them to seize the robbers at which point Colclough shouted “you b…., I’ll blow your brains out!”

“Fire away, have the first shot” replied Hooper, but Kite and Baish were reluctant to grapple with them, so instead Hooper kept shouting in a loud voice to attract further attention “Robbers!” with the robbers retaliating by trying to drown out his voice by shouting “Fox hunters, Tally Ho, Tally Ho”

The robbers then ran off again and a 3-hour pursuit ensued with extra re-enforcements joining the party in the form of Hooper’s brother James, who happened to be crossing the down from Tilshead to Imber, Hooper’s shepherd and his son from Imber and Mr W Sainsbury to help them with the arrest.

One of the robbers, Benjamin Colclough, fell and was left , but the chase of the remaining two continued.

Exhausted, they were finally surrounded, but still put up a spirited resistance with their fold sticks, threatening Mr Sainsbury who retaliated by holding up his large whip and saying “If this is not enough for you, I have a brace of bulldogs (pistols) in my pocket. If you make the least resistance, I will shoot you dead on the spot”

At last they surrendered; the pursuit had lasted over three hours and the stolen pocket book was later found on the down and the notes safe.

The two robbers were escorted to the Lamb public House at West Lavington and given to the constable.
The next day, Morgan found the third robber (Benjamin Colclough) dead on the downs. His death certificate states he was 35 years old, a hawker, and that he died from ‘rupture of a vessel on his brain, produced by over exertion in running away to escape justice’.

The fourth robber, (Richard Harris), was later apprehended and committed to Devizes Prison with the others others (Thomas Saunders and George Waters), pending their trial.

The Jury at Benjamin Colclough’s inquest gave the verdict of felo-de-se one who ‘deliberately puts an end to his own existence, or commits an unlawful act, the consequences of which is his death’.
The three robbers were sentenced to 15 years transportation and embarked on board the convict ship Lord Lyndoch for Hobart, Van Diemen’s Land (now Tasmania) on 5th September 1840, arriving on 5th February 1841.

There were many other instances of highwaymen accosting travellers on Salisbury Plain in the 16, 17 and 18 centuries, especially on market days with farmers having to travel well-armed. These two memorial stones were put up as a deterrent!

This article was created by Bridget Herniman from extracts of Lyn Dyson’s and Quentin Goggs’ book on The Robbers’ Stone. All proceeds of the sale of this book and others by Lyn Dyson go to support the West Lavington Youth Club.